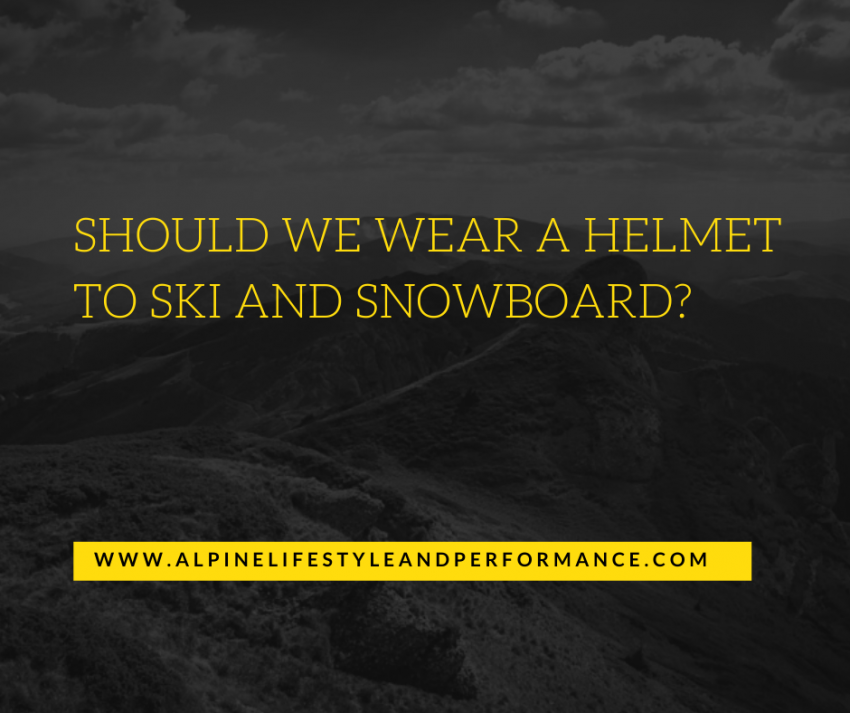 Much like vaccines and mask wearing, the topic of ‘should we wear a helmet to ski and snowboard’ appears to be hugely emotive! I will not get into a debate on this, however as a physiotherapist with over 15 years experience in the snow sports industry I would like to validate a few things. I have previously written a blog on skiing out of control and I am currently on a drive to increase safety awareness on the pistes.  Recently, I have teamed up with Morzine Source Magazine  and launched the Piste X Code which is a campaign to increase safety awareness on the pistes.  You can see therefore, that I am passionate about improving safety for all.

Does wearing a helmet increase your risk of neck injury if you have a fall?

Firstly, if you have an accident whilst wearing a helmet, there is absolutely no substantial evidence to suggest that you are at increased risk of neck injury.

Up to 20 % of ski and snowboarding injuries each year are head injuries (Haider et al, 2021).  However, head injuries are massively underreported. Most people with a mild concussion sustained on the slopes will not seek medical attention. Most will make a full recovery, however we do not yet fully understand the longer term effects of a concussions on cognitive decline and mental health.

Does wearing a helmet make you ski and snowboard faster and take more risks?

Secondly, to date, there is no substantial, well conducted research to support the idea that wearing a helmet makes your ski faster and take more risks. This is purely an anecdotal assumption. You can find any information that you want on the internet; both for and against this theory. However, there is no robust research to support this theory! Do you drive faster because you are wearing a seatbelt? I don’t think so! Helmet use does not give you a false sense of security!

For people that are against helmet use due to the theory that more risks are taken, a study suggests that it is the perception that helmet use increased reckless behaviour, rather than actual fact (Tudor et al. 2010). A lot of these assumptions are based on a risk compensation theory which implies that additional safety measures lead us to take more risks. However, this theory is not specific to skiing and therefore should be interpreted with caution.

There has been an increase in the speed that skiers and snowboards travel at in recent years. However, this is more likely to be due to advances in ski and snowboard equipment and better groomed pistes.  Even 10 years ago, the pistes were less smooth with more lumps and bumps which enforced skiing and snowboarding at slower speeds.

Does wearing a helmet reduce your hearing and restrict your field of vision?

Finally, does wearing a helmet reduce hearing and restrict the field of vision? Interestingly, I know that may instructors feel that they do. A study done by Tudor et, al. (2010) supported the fact that helmets may influence the level of the hearing threshold.  However, it is important to note that improvements in helmet technical specifications have progressed over the last decade.

In principle, I agree that hearing can be slightly diminished when wearing a helmet, but I do believe it is something that you can get used to. I know that some people will strongly disagree with this statement, and that is ok. Perhaps visual and auditory restrictions is something that manufacturers need to address further? Consider that when choosing a helmet it is a good idea to try a few different brands and ensure that it is well-fitted to minimise any potential restrictions.

I’ve met people who have never worn a helmet and not had an accident until the day that they put one on! Is this a coincidence or not? We’ll never know!  Many people have skied their entire lives without a helmet and have never had a problem.  However, snowsports are becoming more and more popular and people seem to take bigger risks.  It only takes one bad fall or collision to change your life forever. No one is invincible!

So, should we wear helmets to ski and snowboard?

A meta-analysis carried out by Kelly et, al, (2010) concluded that:

‘the use of helmets had a significant protective effect against head injuries among skiers and snowboarders’,

So should we wear a helmet to ski and snowboard? In my opinion, absolutely!