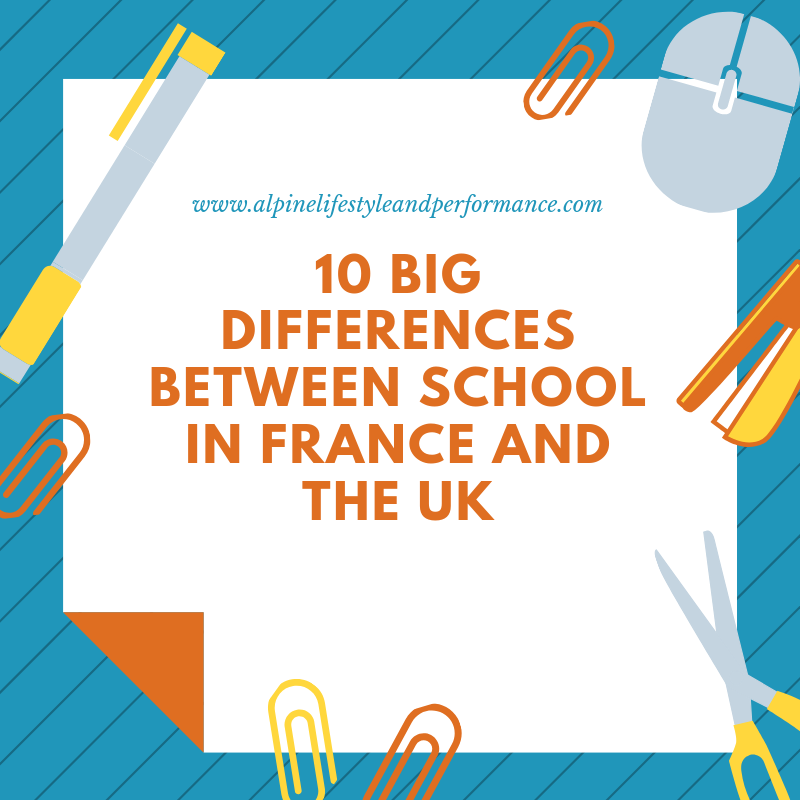 So many of my friends and family ask me about the differences between school in France and the UK. So, with children all over France returning to school this week, I have decided to compare the two education systems.

Back to school after the summer holidays is termed ‘la rentrée’.

Like in the UK, the school year starts in September.  However, the entrant age runs according to the calendar year of birth; from January to December.   So for example, all the children born in 2013 will be going into the first year of primary school this week.

The compulsory age for education has just changed from 6 years to 3 years.  However, even before the change it was very unusual for children not to attend school.

This means that for children born late in the year – September, October, November and December they will only be 2 years old when they start school.  My daughters both fall into this category.  My oldest was 2 years old when she started school!

The école maternelle follows a curriculum which aims to prepare children for primary school.  This includes reading, writing, numeracy and a foreign language.  In our case the foreign language has always been English which is not so useful for a British child!

The primaire or primary school runs from the age of 6 to 11 years.  The school years within the primaire are:

Pupils enter the collège or middle school at 11 years old.  Pupils will start to consolidate the knowledge that they learnt in primary school and progress through to preparation for Lycée.

The lycée which is equivalent to high school or sixth form is from 15 to 18 years of age. Different Lycées are geared towards providing the foundations for different career or higher education pathways.  Some have a strong academic focus and others lean more towards trade or vocational options. The lycée prepares students for the Baccalauréat (le bac) which can lead on to higher education studies or the CAP (Certificat d’aptitude professionnelle) which is more vocational in nature.  In contrast to A-levels, le bac still covers a wide range of different subjects.  Students are not required to narrow down their options at such as early age as they are in the UK.

Further information about the school system and school life can be found on the French Entree website.

Another fundamental difference between school in France and the UK is that you don’t wear a uniform to school in France.  While you can easily argue the pros and cons to this, I like the fact that I don’t have to make sure I have everything washed and ready at the start of each week!

Although this will depend on the age of a child, the length of the school day is a big difference between school in France and the UK.  In France, the school day may run from 8:30 am to 4:30 pm.  However, often children in the maternelle and primaire have no school or only half a day on a Wednesday.  The exact hours and days vary from region to region.

Many schools also have a lunch break of 2 hours.  As well as allowing for a long mealtime, this also enables the younger children to nap.  A lunchtime nap is in place up until the age of 4 years old but French children tend to stay up a lot later than British children.

Children that eat in the school canteen benefit from a 3 or 4 course meal each day.  Nutritionists prepare a well-balanced menu which offers a great deal of variety.  Chicken nuggets and chips never feature on a menu, however I have seen ‘moules frites’ (muscles and chips) listed more than once!  Fish fingers are also not a staple in France, but rather a fillet of fish in a parsley sauce with green beans and boiled potatoes!  I have even seen rabbit, grouse and kangaroo on the menu.

I love looking at the canteen menu each day.  Honestly, the children eat better than I do!  In my experience, the canteen food on offer is a huge difference between school in France and the UK.

A standard school lunch will consist of a salad or appestiser, followed by a main course, with a side of vegetables, then a cheese course and a dessert which will often be fruit, and occasionally an eclair or pastry.  As you would expect in France, fresh bread is offered daily.

However, if children do not wish to eat in the canteen, a packed lunch is not usually an option.  Instead, children go home for lunch and with many schools having a two hour lunch break this is easy to do if it fits around the parents schedule.

The majority of schools in France are state schools, run by the government. However, there are also a number of state funded and state governed private schools.  These are commonly Catholic schools, where the government still pay the teachers and in return the school adheres to government terms and conditions.  These schools generally do not have high fees, with costs often only amounting to 100 euros a term.

Privately funded schools can be found in and around some of the bigger cities in France. Many of the International schools fall into this category.

Schools in France are secular.  Aside from the private Catholic schools, schools do not tend to study religious education or celebrate religious festivals.

One thing that I miss from the UK is the annual nativity play.  However, schools will often put on a production during the school year.  For example, at the age of 4 my daughter was learning about India.  To complement this, the whole maternelle put on a stage show to demonstrate traditional dance and music from India.

Schools in France place a lot less weight on creativity compared to the UK.  In France, more emphasis is placed on learning ‘parrot style’ and reproducing facts and figures.  Learning is very specific with more traditional academic styles and a lot less value placed on self expression and exploration.

Another difference between school in France and the UK is that in France learning grammar and times tables by heart starts from an early age. Memorising and reciting poetry and dictations is also the norm as opposed to the UK where learning in more practical and exploratory ways are encouraged.

Is the French style a good or a bad thing?  I will let you know what I think as we progress through the schooling system.

Extra curricular activities are usually done outside of school in France. Privately funded and International schools are the exception.  French schools do not tend to offer after school sports or creative clubs, as is often the option in the UK.  Having said that, my daughter has skied, snow shoed and cross country skied as part of the school week during the winter.  There are also swimming lessons

However, there tend to be many community clubs which make up for this.

In other words, each region has slightly different dates, although there is some overlap between them. And each year, there is a rotation as to which zone has breaks up first.  So for example, February half term for this school year will begin with Zone C who have two weeks off school from the 9th of February. The next zone, in this case Zone B then overlaps from 16th February, followed by Zone A from the 23rd February until the 8th March.

So far, in my experience school trips are similar to the UK with one big exception.  Some schools in France take the Maternelle, the pre-schoolers away for a couple of nights.  Thats right, children aged 3 to 6 years of age go away from home for days at a time!

The away trip for the Maternelle is optional and not every school does this.  However, it seems that many schools across France offer the trip on a biannual basis and most children seem to be allowed to go!

My daughter went away for 3 days and 2 nights aged 4!  I was extremely reluctant to let her go but she was as keen as mustard.  I signed the consent form when her best friends mum said she was going to volunteer to join the trip.  Unfortunately, this didn’t happen as so many parents volunteered however, with a lot of reassurance I agreed to let her go.

The school stayed in yurts, near Chambery which was two and half hours away.  I did not sleep the whole time she was away!  What was I thinking, she was only 4!  However, she had a great time and the French parents barely batted an eyelid with their children being away from home so young! Would I allow it again – I don’t know!  I never would have imagined that I would’ve agreed to it in the first place!

There are numerous other differences between school in France and the UK.  These include the fact that parents must take out annual insurance for their children to attend school in France.

Also, most families receive an annual ‘back to school’ fund for their children once they enter primary school as part of their family allowance.  This is to help to pay for back to school essentials.

Finally and controversially, children must be vaccinated against diphtheria, tetanus and polio to attend school in France.  There are currently plans to add more vaccines are set to be added to the list.

If you have any additional or different experiences of the school system in France I would love to hear about them.  If you want to read more about some of the main reasons that we love living in France, you can read our blog on why 10 Reasons living in the mountains is awesome.